Back from eastern journey... Well back home and realize I haven't blogged in awhile. I enjoyed the rest of my trip to Washington. One highlight was having the opportunity to hear archaelogist,Fredrik Hiebert , talk about the discovery of treasures from the National Museum of Kabul which were though lost when that museum was bombed. Fortunately the curator and staff had smuggled them to bank vaults were they lay safe for thirty years. He oversaw the cataloguing of this collection and curated the exhibit which is currently at the National Art Gallery. There, I was able to view the collection in person and it was amazing. I also visited the new National Museum of the American Indian which is quite amazing as well. And for something a bit different while staying with my friend, Ginny, in historic Falls Church, she took me to Mount Vernon, home of George Washington. I certainly know more about George than a did before.
From Washington, I went to Montreal which was mainly spent with friends but on the educational front, I went to the Fur Trade at Lachine National Historic Site, which marks where the voyageurs used to start their westward journeys. I used to live and teach in Lachine so I am really happy that this site has been created. Nearby is the home of Lasalle, the explorer who in his attempts to reach China, caused his seignery to be nicknamed Lachine. If you haven't been to the lakeshore area of the island of Montreal I totally recommend a trip. You can actually bicycle along a lovely trail from Old Montreal to Lachine which marks the beginning of the area known as The Lakeshore (the widening of the St. Lawrence is called Lake St. Louis). Note picture of canal in Lachine!
Posted by meredyth kezar at 5:22 PM No comments: I am currently sitting at the National Geographic headquarters in Washington, listening to someone talking about her students' blog on science. How appropriate is that! This is a wonderful seminar so that I feel very fortunate to be here. Here is the link and you can check out speakers and even download the papers. This year's theme is Literacy and Science.
Posted by meredyth kezar at 7:54 AM No comments: 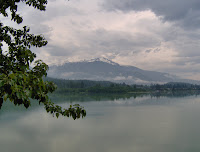 Well, it is officially summer. I am currently getting rid of e-mails as I sit near the pool in Whistler. Hard to believe with the miracles of wireless internet I can also sit here and write my blog. I must admit it is a bit overcast but there you go...I have a couple of professional books staring me in the face. But what am I really reading? I just finished the latest, Elizabeth George mystery, Careless in Red, about Thomas Lynley after the death of his wife. I was excited to discover it in the fast reads section of the local library. Summer and mysteries just seem to go together.
Posted by meredyth kezar at 3:25 PM No comments: