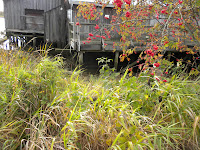 I am feeling once again guilty for my lack of blogging. I have had a cold for over two weeks and I think it has slowed me down a bit although I have been reading lots. One favorite has been The Sanctuary Line by Jane Urquhart. I missed seeing her at our Writers' Festival due to not booking a ticket early enough but I really enjoyed the book. Funny the triggers books have. It's a book of childhood memories and reminded me of my childhood and the many hours spent with my friend, May, who died in February, not that our childhood was as riveting or as traumatic as that described in The Sactuary Line but...

I also had an interesting read, The Good Novel by Laurence Cossé, thanks to my friend, Emilie who works at a neat new bookstore in Vancouver, Sitka Books. I met Emilie at the much mixed Once Upon a Huckleberry children's book store on Main Street, a victim of the recession. The Good Novel is about a unique store in Paris where only the books that a committee of writers' believes to be truly good are sold much to the anger of some who seem to be causing harm to the committee and the store.

I also finally finished Lacuna by Barbara Kingsolver, which I started months ago. It's not a book to read a few minutes each night before falling asleep but when I spent a couple of days sneezing and sleeping I had time to keep reading. Having read The Help earlier and Lacuna as the American election was taking place, it helped give me perspective on the Tea Party mentality a bit. I can't help but think political activist, Kingsolver wrote this novel with purpose. Lacuna focuses on a Mexican American man who after a rather horrific childhood, ends up working for artist, Diego Rivera. Through his connection with Diego and Freida Kahlo, although totally non-political, he stumbles into being Leon Trotsky's secretary and cook. After he returns to the United States, he settles in the mountains of North Carolina and becomes a best selling novelist who eventually gets blacklisted in the McCarthy Era, causing another return to Mexico.

Now I have also read quite a bit of chick lit and mysteries. I honestly haven't read much new children's literature or young adult literature, and I am already wishing I could go to the NCTE conference in Orlando and get my hands on those advance copies.

My class though is reading everything in sight. I can honestly say they love to read. I actually did read a new novel, The Billionaire's Curse by Australian writer,Richard Newsome. We had a great day at the Vancouver International Writers' Festival. I had really wanted to take them to see Sharon E. MacKay who wrote Charlie Wilcox but the timing didn't work out so I asked Education Coordinator, Ilona Belks, for her suggestion and she chose well. We had a great morning with Kevin Sylvester, Richard Newsome, and Richard Scrimger. I always have loved Kevin Sylvester's sense of humour on CBC, but his two co-panelists were even more hilarious, especially Richard Scrimger, but also they were wonderful with the kids and had lots of great writing tips. 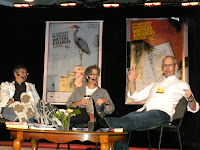 Here's a picture of the three. The first picture today was taken on a walk in Steveston a couple of weeks ago, both with my new camera!
Posted by meredyth kezar at 7:29 PM No comments: