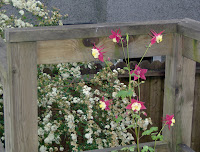 Thanks to the wonderful Brenda Powers through the Big Fresh Newsletter I discovered this website which is nothing but Thank you notes.  Brought up on the idea that one should always write thank you notes, this blogger, Leah Dieterich, has a thank you note each day.  She thanks objects  as well as people, which is rather neat.  So today, I want to thank long weekends, days when the sun shines, the rewards of flowers planted long ago that bloom year after year surprising me like the Columbine in this picture. Thank you for books, almost any books because I enjoy reading so much. Thanks for friends who share Purdy's chocolate bars.  Thanks for kids who make me laugh.  So many things to be thankful for so I am putting this blog on my list so I don't forget about it when I am in a complaining mood.

As indicated before I have been busy moodling and encouraging my class to moodle as well.  One thing it does enable is my class to ask questions any time and since they are usually easy to answer it's not really a problem and I think they like it.  Now when they say they have lost an assignment they know they can check on the moodle site so no excuses.  There is still lots of old fashioned reading and writing going on in class and in homework assignments  but I figure this is another place for students to communicate in a focused way.  Notice we seem to have a new verb. 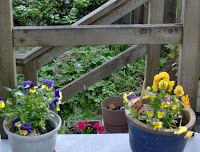 I am finishing this Monday morning and the sun is shining and I am barefoot so the outdoor furniture may actually go outside today.  Dressed warmly I managed to do a bit of gardening yesterday but it looks as if it could be more pleasant today.  Yeah!  Thank you!
Posted by meredyth kezar at 10:00 AM 1 comment:

The joys of teacher and the frustrations of technology 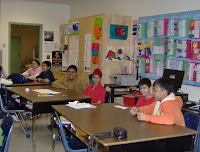 Well let's see this week I couldn't get my phone to stop telling me I had messages when I didn't have messages, I was given a "box" that makes my old TV high definition but now I can't figure out how to tape shows anymore, and I keep having problems getting moodle to do what I want plus my dear old ibook G4 isn't quite up to the latest technology and I can't keep getting messages to update when the system is incapable of updating.  Someone suggested I just invite a ten year old over... and let's face it the computer is over four years old.  Part of me seems to need technology and the other part just can't quite handle it.  hm mm...

On the other hand, despite several sessions of the homework club this week and the marking and the prepping and never feeling quite on top of things, I have to say that yes, this year has been a gift and I do love it.  I have children who carry my books to and from my car, I have one student who ended up mopping the floor yesterday after school because he was bored.  They check to make sure someone is on peer helper duty, they put up the homework, they hand it out, they make me laugh, they compliment me on Funny Hair Day, they amuse me with their ads for Healthy Living, they discover the joys of reading a good book, they arrange their own field trips (even if they aren't where I necessarily want to go on).  I get to drink coffee in the staffroom and eat snacks on Wednesdays with interesting colleagues.  I have a secretary who truly loves all her students.   Plus there's Scholastic Book Club, my friend for over 40 years since I was in high school, where you can still find amazing books for reasonable prices.  I was almost late for school reading Cut by Patricia McCormick.

So as I survey the world of 28 sixth and seventh graders aged 11-13-19 boys and nine girls from that stool that I rescued from the basement and look at their projects on the latest fadeless bulletin board paper with sky and clouds, as they read during those rare moments of hushed silence I think it's not quite time to retire. Plus then I probably would have more time for technology frustrations.
Posted by meredyth kezar at 10:04 PM No comments:

And now for a little fiction about Afghanistan and lit circles

One of the best things about going to an International Reading Association conference is all the books, and books for reduced prices or even free!  One book I acquired this trip was Born Under a Million Shadows by Andrea Busfield. Told from the point of view of an 11 year old, it focuses on this boy and his mom and their life after his mom becomes the housekeeper for a British woman and her two house mates.  Based on her own experience of living in Kabul after the American occupation, this is a fascinating book.  Once again you are struck on how every family in Afghanistan has been so directly damaged by the constant warfare that has occurred there.  Also I liked this book in how the author attempts to look at Western culture through they eyes of this boy.
A book for younger readers is Shooting Kabul by N.H. Senzai.  This book is about a Afghan family who initially return to Afghanistan after the Taliban has taken over having rid the country of the Russians.  The father thinks that life will be better and wishes to bring his skills as an agricultural specialist.  After the family's return he begins to see that life is becoming more and more restrictive and he is forced to flee back to the United States with his family.  As the family is escaping to Pakistan in the confusion their youngest young is lost and can't be found.  The family is still forced to leave for the United States but each family member feels great guilt and responsibility for the lost child.
My grade sevens are currently reading books in literature circles and The Breadwinner by Deborah Ellis has been a favorite.  I told them how the book came out and then 911 and that went the United States decided to go to war against the Taliban the book was an instant hit as most people knew little about Afghanistan.  It's hard to believe that these kids were toddlers then but we have done work on 911 this year.

I have had a bit of a hard time really getting reading groups or lit circles organized this year.  I blame this somewhat on having a split class and having already to do so much splitting of groups.  I have been quite pleased by how much more my class generally is reading now and lots of kids have read 30 novels independently.  Doing lit circles with the same book hadn't seemed to be working that well for me in the past so that I started letting kids bring their own books into lit circles and that worked well.  In my years at the school board I had been to a couple of Faye Brownlie's workshops on Lit Circles and read her book, Grand Conversations, so when the grade sevens begged for lit circles, I decided to use her strategies somewhat.  Books are in groups of six and I started with five choices for 17 Grade Sevens.  Groups meet who are reading the same book once a week with me.  In three weeks all students are actually reading at least their second book as well as usually reading other books.  Students are enjoying the experience and moving into new groups as they finish their books.  My grade sixes are doing a novel study with our resource teacher of After Peaches.  They are really enjoying the books and one student has had the thrill of an e-mail conversation with Michelle Mulder, the author.
Posted by meredyth kezar at 7:35 AM 2 comments:

In Chicago I only bought one professional book, Surviving and Thriving by Maria Carty. I am addicted to professional books  but  I have a few too many as it is and some I haven't even seriously looked at yet.  True Confessions.  I picked this one up though as I glanced through it I thought it had good ideas for experienced as well as new teachers.  What a perfect gift to a student teacher!  This year back in the classroom has reminded me of what an art there is to classroom management and this book has great tips and ideas for making your classroom inviting, and organized for both group and individual learning.
The flip book format is one that Pembroke has introduced in the last year and one that I really like.
Posted by meredyth kezar at 7:52 AM 2 comments: