Growing up in the Eastern Townships of Quebec, I never imagined that it would be known throughout the world due to a series of mysteries.  I mean there were well known Canadian writers such as Hugh MacLennan and Mordecai Richler who had summer places but still…

A few years ago someone asked me if I had read anything by Louise Penny, a writer whose mysteries were set in this area just north of Vermont and between Montreal and Quebec City.  I hadn't but recognized her name as she had been the CBC morning program host in Quebec City when I spent three weeks there in a French program and later she was a show host on CBC in Montreal.

Since then I think I have probably read all her books.  I am a mystery lover.  In my childhood I was hooked on Trixie Beldon and Donna Parker.  Much later during a difficult summer spent in the Eastern Townships when we were packing up my family home and my dad had had a massive stroke, I got reading Agatha Christie  mysteries as an escape at our cottage. Then started discovering contemporary mystery authors I enjoyed  such as Sue Grafton and P.D. James.


My love of Tony Hillerman's books sparked an interest in going to Arizona and New Mexico.  When I finally went to Santa Barbara I realized my whole image of the area came from those Sue Grafton mysteries.

I have to admit I have had some issues with Louise Penny's books as I know the area a bit too well.  Just as Sue Grafton's Santa Teresa is not quite Santa Barbara, Louise Penny has manipulated her setting as well, which is totally understandable, but sometimes distresses me I admit.

But I still do enjoy her books and love that she has made so many people aware of a very special and beautiful area.  I somehow like the idea that Hillary Clinton knows about the Eastern Townships from these books (she is a fan who just had Louise Penny as a weekend guest).  Penny's  popularity is incredible. Her fans are devoted and she has won many awards as well as being recently named to the Order of Canada


I laughed at myself on my last trip to Quebec as I ended up in a few settings or inspirations for settings in her novels.  I went to the English Language Library in Quebec City that I learned about from one of her mysteries, Bury Your Dead.  I heard the monks chant at St Benoit du Lac Abby, the inspiration for A Beautiful Mystery, and I had dinner at Hovey Manor, the inspiration for the setting in A Rule Against Murder.

If you haven't read her novels they focus on her hero Gamache, a detective with the Quebec Provincial Police who stumbles into the little village of Three Pines (fictional but in the vicinity of Sutton where she was living in the country until her husband's illness forced a move into nearby Knowlton). Here Gameche meets a motley crew of villagers and finds himself drawn here with his police colleagues again and again sometimes due to crime, others for a need of clarification.   He and his wife end up buying a home there.

Penny is a prolific writer.  It may have taken her five years to publish her first book but she has been writing a book a year for quite awhile.  In her Facebook posts, she shares her writing process with her readers, as well as her daily life.  This life has become increasingly difficult in the last few years as her beloved husband developed Alzheimer's and died a few months ago.

A Great Reckoning is her last published novel.  She has now finished her third draft of the latest.  I really really liked this one.  It takes place at the fictional Police Academy for the Quebec Provincial Police where her hero, Gamache, supposingly retired to Three Pines, has now become the Director.

I found the mystery quite engaging and there are many layers as we find the reason that Gamache has agreed to take the position and of course, the unravelling of a murder.  We are reunited with familiar characters as well as meeting some interesting young trainees.  The townspeople of Three Pines become very involved  and a parallel mystery in the village is examined as well.  This novel had a poignancy, and I wondered if perhaps it was because she wrote this as she nursed her ill husband in his final illness.  I found myself in tears as I finished the novel, not usual when I read a mystery.

Anyway if you haven't checked out this author, why don't you see how you like her.  And you just might be inspired to visit the Townships.

Posted by meredyth kezar at 5:35 PM No comments:

What have I been reading…Everyone Brave is Forgiven 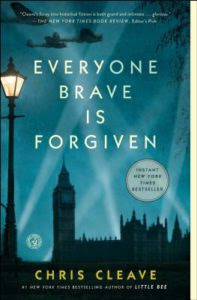 I was so impressed in January when a friend sent me an annotated bibliography of all the books he read in 2016.  Now when I belonged to a book club I used to write a response to each book so I actually would have something to refer to when we had our book club discussion.  Also it gave me a record of my reading.  And I knew that writing does clarify one's reading, at least that is what I told my students at all levels.

This blog became a place I could talk about my reading, often children's, young adult novels and picture books.  But in retirement I have slacked off on this.

Because everyone knows I like to read, people often do ask for recommendations and I really hadn't had that many books that had been sweeping me away lately.  I had one book I had begun in the summer and then it was giving me nightmares although it was a good book so I had set it aside.  I began a book recommended to me when I went away for a short holiday and enjoyed it, read half of it, and then haven't picked it up again in two months.

I read a lot of detective novels.  In fact I have one going now.  I also quite happily read chick lit.  And I still happily read young adult books.  I am also not an organized reader.  I don't put holds on library books often.  I often rely on fast reads at the library.  And this is how I read Everyone Brave is Forgiven.  I had heard Chris Cleave interviewed about this book telling how the idea for it came from one of his grandfather's who was part of the Siege of Malta and his two grandmothers, one a teacher and one an ambulance driver in the Second World War.  Little Bee, one of his earlier books, was one that simply swept me away so I was thrilled to see this as a fast read.  That means you have to return it in a week or pay $1 a day.  No renewals usually.

This was a book that I couldn't stop reading.  I was swept away by the story as I watched how the war changed each of the main characters.  I always was struck about how when I met my mother in law at my age she had been a nurse in the Italian campaign.  Many of my friends' parents had spent their youths in the war.  The Vietnam war raged on in my youth but it didn't really touch me directly.

This novel puts you in London during the Blitz.  It puts you in Malta when they are trapped there by the Germans.  The book is also unique in that it looks at class and racial issues and even drug addiction.
I definitely was swept away...
Posted by meredyth kezar at 4:35 PM No comments: