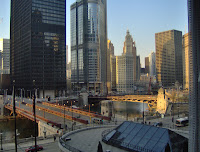 Well, I took a blogging break during March break but of course now it's back at work. From Sunday until Tuesday I spent in Victoria including a rainy trip to Chemainus with a couple of friends on Monday. Could you believe more snow? I kept telling myself that this was all preparing me for visiting Chicago.
Due to being on a committee for the International Reading Association I left for Chicago last Friday morning. All set to go, seated for my three and half hour direct flight, surprise surprise, there is something wrong with the plane and we are told to leave our bags and wait until the situation is checked. Well six hours later (two spent waiting in lines and a few conversations with my travel agent) I left on another flight (my original flight did actually leave an hour later). Instead of arriving in Chicago at 2:30 it was after 8. After an efficient taxi ride, I dumped my bags at the Renaissance. I literally ran the five blocks from my hotel to the Lasalle Bank Theatre where Jersey Boys was playing only an hour late for the performance but I had a great seat and it was a great show in a stunning theatre.
Fortunately, the rest of my trip went smoothly. I spent two days literally running around Chicago in perfect weather. And yes, I even ventured into Obamaland, the University Chicago campus area in Hyde Park. I had a pleasant time in (what I discovered later was) his favorite book store, 57th Street Books, where I told the bookseller about our Canada Reads selection, The Book of Negroes, and I found out the Chicago Reads selection was The House on Mango Street by Sandra Cisneros.
This was my second trip to Chicago and I still think it's a fabulous city with very helpful, friendly people and amazing architecture. Saturday, I woke up to a view of the river (see picture) and after a scrumptious breakfast at a former office building turned hotel, the Hotel Burnham, I walked through Millenium Park to The Chicago Art Institute Museum where I spent four and a half hours soaking in all the great exhibits, well of course only a few highlights really. I wandered back to my hotel with many stops, and then saw The Quiet Man Tales, a cheerful Irish play at the historic Chicago Theatre.
Sunday, I decided to go out to Hyde Park to visit the Robie House. I am a bit of a Frank Lloyd Wright fan and on my other trip we went out to Oak Park and visited his home there. Of course I missed the part that it was closed on Sunday due to restoration, but a block away I discovered the Oriental Institute Museum which has an amazing exhibit on Mesopotamia (now modern Iraq). Grade seven teachers should check out their website. The University of Chicago campus- Hyde Park area is beautiful and a nice place to wander on a beautiful spring day.
My next stop after the almond croissant at Medici's, was the Museum of Science and Technology. It's huge, the biggest such museum in the world, and amazing and contains a real German U-boat, a plane, and a recreation of a coal mine all of which you can enter. Incredible displays including (for a fan of miniatures such as myself) the fairy castle and a miniature railroad trip from the west coast to Chicago. You could spend days and I only had a couple of hours...
The express bus took me back to The Loop and I had time to take advantage to the 25 percent discount sale at Borders Bookstore for educators and for $2.50, I took the train out to the airport in 45 minutes. The next couple of days were spent at the Airport Hilton on my IRA search committee which turned out to be a fascinating experience. I arrived home very late Tuesday night, my plane only an hour late due to Chicago weather (the brilliant weather only really lasted the weekend).
A bit hard readjusting Wednesday but we are back into it now. So stay tuned for more local postings!
Posted by meredyth kezar at 6:18 AM 1 comment:

Vocabulary and other rambles... 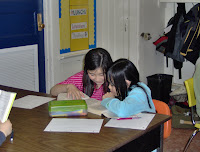 It's Saturday morning which always seems to be my blogging time. I spent all of yesterday basically in my office, a very unusual occurrence. No schools, no formal meetings. My cubicle often looks like a cyclone went through-me. This was a chance to try to sort things out. I have to say that the best part of our evolving project is the opportunity for me to spend more time in schools, teaching and learning. The magic of running into a student who has just come from the library and wants to show me the new "just right" book he has ready to read to himself, students asking me if they are going to get to write today anything they want again, teachers asking when I will be back. It's really special. Those of us in consultant positions don't always get the day to day high of seeing students engage in learning so again many thanks to those teachers who open their rooms to me.
Part of my job is reading "the books" and "work shopping"them etc., but in the last month as I have directly worked in classrooms with teachers incorporating The Daily Five (Three, four) and R5 at Maple Grove, Queen Elizabeth and Moberly, and watching the excitement of teachers and students has been incredible. It's funny, several years ago, I became excited about the book, Small Group Reading Instructionand gave workshops. I had done small group instruction and had my students working independently but it was a bit of a complicated process not easily transferable to others. Jodi Carson started working with small group reading instruction and through Shelagh Maguire she discovered The Daily Five, incorporated them into her fourth grade classroom, and teachers in Vancouver started using the strategies. BCLCIRA and LOMCIRA brought The Sisters to Vancouver. Study groups flourished. Although I advocated and actively promoted the approach, not having my own classroom but I actually hadn't really "experience it" myself until this year with my focus on six elementary schools.
So to the point. At Moberly this week, we introduced the fourth element of The Daily Five, word work in a second grade and fourth grade classroom. In my work in my district I have been increasingly concerned about vocabulary and how to make our students word savvy. We work in a multicultural setting with many students who have English as a second language. Some of these students are very proficient in their first language, others are not. We also have students who may have English as a first language but still do not enter school with large vocabularies. This lack of vocabulary really is a problem for comprehension. So much work on vocabulary shows us now that we need to place a greater emphasis on this for all our students. This year I have spent a fair amount of time reading about how to effectively teach vocabulary and what vocabulary to teach.
I was excited to see the latest International Reading Association book club selection was Teaching Individual Words by Michael F. Graves. This follows his other book, The Vocabulary Book which I admit I haven't read. The components of vocabulary instruction he advocates are 1. Providing Frequent, Varied and Extensive Language Experiences
2. Teaching Individual Words.
3. Teaching Word-Learning Strategies
4. Fostering Word Consciousness

I don't know if he is planning a book on each of these but he has written this book because he thinks teaching individual words is central to vocabulary instruction. The book is very useful as it has many strategies that can be used k to high school but it isn't to me an easily accessible book. The layout of a book like Janet Allen's book, Inside Words, is so much more user friendly. One problem I had is that the examples were not always right where the explanations of the strategies were. And I also had to question the proofreading as in an example of Venn Diagrams we are told Canada has seven provinces while the U.S. has 50 states. Sorry, a bit off putting. Last time I checked we had ten! Two very useful things that I did discover from reading this book were google images. If you need a picture all you have to do is google google images. Excellent! And I now know about useful sources of student friendly definitions, the Collins COBUILD New Student's Dictionary and the Longman Study Dictionary of American English which I plan to check out. Also I was reminded of the first 4000 word list. And there are many useful strategies that I hope to incorporate in my teaching such as how to use picture books in k-2 to instill vocabulary.
Posted by meredyth kezar at 7:09 AM No comments:

One week before March break but who is counting? 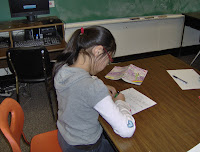 Weekend vow-upload photos! My cubicle and house seem to have a resemblance-stacks of books! We may be in a digital age but there sure are still lots of books! Again a diverse week for for me from more fun with grade ones and twos to session two of Literacy 103 for high school teachers. This was the week that many of the education centre staff began their 10000 step challenge so that you kept running into people in the stairwell. I also must thank Maple Grove for continually seeming to feed me yesterday from a lunch meeting with the intermediate staff to a lovely social after school to celebrate that report cards had been finished and handed out. It's a classy place!
I had meant to spend a period in Chris's grade four/five but ended up there all afternoon. It's been interesting as I am working on the Daily Five (first three-read to self, read to another, independent writing) and R5 (read and relax, reflect and respond, rap 1, rap 2) in both her class and in Dana's grade four at Moberly so that it is interesting to compare and contrast. All of us have found using these strategies really effective and have been able to make interesting observations about the students and use this information to plan next steps... formative assessment in motion.
My next blog is going to talk about some professional books I have been reading but I have discovered a new useful blog from Stenhouse. There also seems to be a movement to have Poetry Friday so this is a good source of poems for this as well.
I have just found a fascinating blog, always learning, thanks to Choice Literacy that I am going to start checking regularly. It's put together by a young woman who teaches at an international school in Thailand. It's all about teaching technology and it's great. I have been just watching the best videos about technological change. Check it out!
Posted by meredyth kezar at 7:23 AM 2 comments: