Curling, JOlympics, and an Awards Ceremony at BC Place 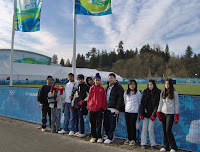 There are actually demands for me keeping this blog updated-of course at the moment it may seem more like the Olympic blog than the Later Literacy Blog.
For those of you who don't live in the city it's hard to describe what it is like here.  I can't remember anything quite like it.  I think our last big party was Expo 86 which seemed mainly contained within the grounds of the World's Fair, some of which is now the Athlete's Village.  I also lived in Montreal during the 76 Olympics which I boycotted but have to admit I enjoyed the festive atmosphere.
Despite the fact I have to work and really haven't done much, I have to say I actually feel sorry for those people who are away on holiday because it's kind of amazing being here.
Due to the fact that it is winter or actually feeling like spring, there are no leaves on my neighbour's massive chestnut so I can actually see the fireworks every night if I climb up to my second floor.  That alone is kind of fun. 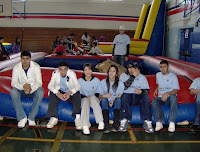 This week at school all the feeder elementary schools' grade five, six, and seven students were invited to John Oliver High School for JOlympics, an event put on by the staff at JO and assisted ably by many of their students (the students in the picture are some of my former students).  The kids had a great time.  Students had academic, entertainment, and athletic stations or some were able to use an "immersion" activity such as building and racing luges, competing as Iron Chefs, building and firing off rockets, or being participants in So You Think You Can Dance.  The opening and closing ceremonies included an official Olympic Torch Bearer and two of our city councilors representing the mayor.  Kudos for the JO community for making a memorable day for our students.


Friday ten of my students and I were able to go to an official Olympic event, women's curling.  A beautiful day. one short bus ride and a short walk and we were at the Olympic Centre.  It was my first time inside although it's my neighbourhood as I only live ten blocks away.  Now personally I would just as soon watch paint dry as watch curling but I have to say it was great.  We had seats in the third row and a documentary film maker who had just made a film on curling was sitting in front of us to give us helpful information.  When I asked my kids if they would like to learn to curl, they all said, "Yes".  The walk back to the bus included a stop in my favorite local kids' bookstore, Once Upon A Huckleberry. 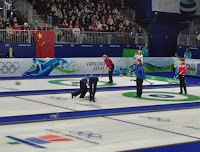 Last night, I ended up at the Awards Ceremony at BC Place.  I forgot my camera but my sixteen year old friend, Yvonne, took lots of pictures so I hope to have some soon.  We didn't get to sing O Canada, but it was neat because the gold medal winners represented nine different countries and to see the happiness of those medalists was great.  We saw on big screen the ceremonies at Whistler and I could see those athletes better than the ones in BC Place!  BC Place looks so spiffy in the Olympic colours.  The special effects were great.  We slipped out before the end of the Loverboy concert, and took a bit of a detour over to see Live City in Yaletown and took the subway home from there.  More great lights.  I have to say I love Canada Line!  I feel like I am back in Montreal with a stop three blocks from my house.  When I got out at the King Edward station, I was greeted with hot chocolate from the Salvation  Army as a reminder of the needy in our city.  What a good idea!  I walked down Cambie with a couple of Olympic visitors.  When I asked them what they thought of our city and it's hospitality I was quickly told how great they think it is. 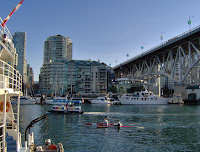 Well honestly I have to go do some work  so that is it for today's Olympic report.
Posted by meredyth kezar at 10:41 PM 2 comments:

The blog I wrote a week ago... Whoops 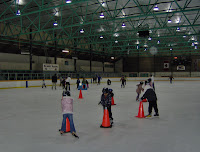 I have been neglecting my blog and actually most of this was drafted a week ago.  I thought I had published it earlier this morning but hadn't so the blog before this one was actually written after this one.
The picture is skating with our  first grade buddies last Monday.

Time always passes quickly it seems.  Well on the Haiti front in the end we raised over 1600 dollars and another 400 dollars for the Nepal Library Association.  Lately it seems I have been trying to drum in the academics before Olympic fever begins.  We are having our own mini Olympics Thursday afternoon and then after school we will be donning our red mittons (our whole school is getting free red Olympic ones) and catching a sight of the Olympic torch bearer as he runs by Sunset Community Centre.  Note I don't have any tickets to any events but hopefully we are going to get some Paraolympic event tickets for our kids.  That's the rumour.  I am going to see what "traffic" is like and if I am feeling energetic I may drag my class downtown to see some excitement at the free venues and ride the Olympic line streetcar to Granville Island.
I keep meaning to write about inspiring professional reading I have been doing but ...
Basketball season is about to end(it actually ended last week) and I have had lots of fun coaching my junior girls.  Can I play basketball?  Not really but why let a little thing like that stop you?  We won three and lost two but we won the last two.  The girls have made great progress!
I also made it through my microscope unit with the grade sixes!   Teaching science is not my greatest strength and trying to hit two curriculums has been a challenge.  The grade sevens are just finishing a unit on ecology and I am deciding whether to hit the earth's core or chemistry... In grade six extreme environments has far more appeal to me than electricity.
A couple of weeks ago  we had a brief foray into sex education.  I am jsut wondering what the grade sevens are going to be like when spring hits. 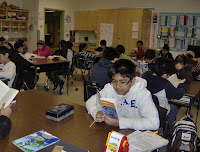 I have to laugh  a bit about my language arts program.  I wouldn't call it stellar!   But as noted before they are all reading and quite happily so.  I continue chipping away at non-fiction reading skills mainly using their science and socials and sometimes math text books.  Word study seems to be helping their vocabulary knowledge and spelling.  They now are much happier and better writers.
Posted by meredyth kezar at 4:53 PM No comments: 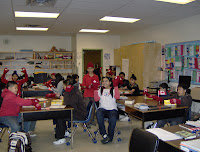 When I first moved here I kept feeling as if I was three hours behind the rest of the world.  When I was in New York City a few years ago, it struck me that I was at the centre of the world.  Right now, I feel as if for once I am back in the centre and for a couple of weeks the centre has shifted slightly. 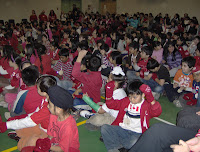 Needless to say our school got into the Olympic spirit this week.  We had our own mini Olympics followed by a trek by much of our school community up to the 53rd and Main to witness the torch relay.  As you may remember we had our own torch relay just as the torch was delivered to Victoria so 105 days later it seemed rather special to finally witness the torch in person.  It was Red Week all week at school and Friday was the day that every child got their own mittens.  As you can see my class were happy with that.  Our assembly after the mini-Olympics was a sea of red (now of course the seventh graders weren't quite as into wearing red as the primary children).
In partners, my class is doing presentations on the Olympic sports.  We had hoped at school to get tickets to the Paralympics but we only came through with a few so that it will be difficult to know how we can distribute them.  Most of our kids are not going to be able to attend any Olympic events but fortunately there are lots of free opportunities that I hope they are able to attend.  Our local high school is doing an Olympics for the fifth to seventh graders Thursday and I am still contemplating a field trip to check out the Olympic free venues the following week. 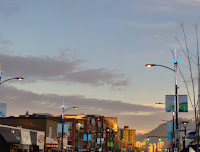 Vancouver in general is definitely having Olympic fever.  My neighbours, for instance, have flags everywhere.  Cambie Street has these cool lights.  And although no one can park in front of my house during the games unless they live on my block I can now zip downtown on the Canada Line in fifteen minutes from my door to Georgia and Granville.  Traffic to work is fine for me although we can't drive along the streets by the curling venue which are often my normal route. 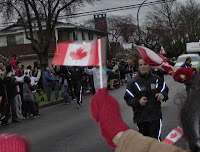 Well hope this gives you a bit of an update
Posted by meredyth kezar at 7:49 AM No comments: