Making the most of a two day week! 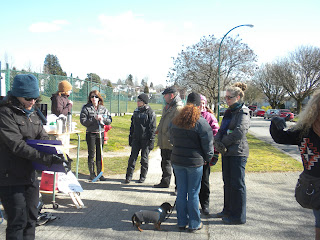 This, of course, was a week like no other!  We spent the first three days on strike.  The positives were that I got more fresh air than I normally get on a week day, and I actually quite a bit of an opportunity to do some garden clean up and have a bit more exercise.  I was fortunate to be on the afternoon shift so that I missed the terrible weather early Monday morning.  I am not going to make much of a political statement here except to say it would be nice to be able to reach an agreement without having to go on strike.  It would be nice to work in a province that I felt really valued public education...

To say that my students were excited to be back at school Thursday would be an understatement.  They may not all admit it but they love being at our school.  Thursday was absolutely crazy.  Phyllis had dropped off all our pottery so that was very exciting.  Each group was supposed to prepare a recipe demonstration in French Tuesday so I had all those posters and some ingredients in the class as well.  Then the grade sevens had Ancient Greek projects due Thursday as well.  I should have taken a picture.  What with the ipads as well my class was very crowded. 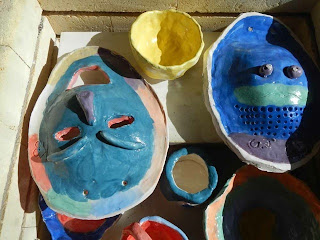 At some point class size was actually reduced and we also had to make schools wheelchair accessible.  Classrooms were made smaller and halls and washrooms bigger and schools stayed the same size.  Then the government made classes bigger again but new or renovated classrooms were still smaller than classrooms in the good old days.  My classroom does not have much space so it's always a bit difficult when I have a lot of "stuff".  Whoops I wasn't making any political comments!

Back to those Ancient Greek projects.  The Grade Sevens only had a couple of weeks to do these as I hoped to have them brought to conclusion prior to the break.  Having three days off made it a bit more difficult for them but most of them did get finished on time.  We are moving on to Ancient Rome but I have actually posted the project now so that they can get started if they want during the break.  They begged me to let them so that is a good sign. 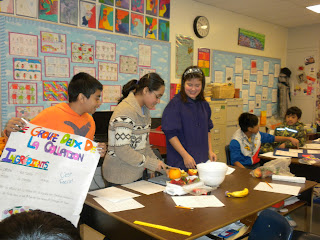 We finally finished our French unit on nutrition and the culmination is the recipe demonstrations.  We did a rehearsal Thursday afternoon with students reviewing rubrics to evaluate the presentations and then together we evaluated after each groups' demonstration and discussed them.   Friday we had the final demos with the food.    Now I wish I had videoed some of them.  Some were quite hilarious.  There were some very interesting cutting techniques used on hapless apples and oranges.  In some ways it's been a bit of a tense week so a little laughter was a wonderful thing.

Lunch was a meeting of the Tech Committee to go over guidelines and procedures with the ipads.  It's been great having them in the classroom but they will be moving to the library so that  all classes can book them out and there will be a wireless router with the cart.

We ended the afternoon with an Intermediate Sports Assembly.  In our small school it's amazing how many students are able to participate in sports every season thanks to our amazing P.E. teacher and other teacher and SEA volunteers who coach. 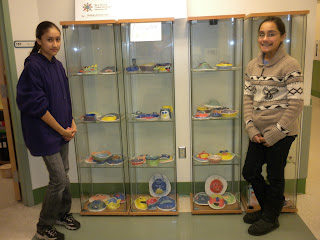 The end of the day came and I had students reluctant to go home.  One kept saying how bored she would be.  This is a student who was born in India, moved to Austria so she speaks German, and three years ago moved to Canada.  As I said, a group made me post the Ancient Rome assignment on moodle so that they could get started over the break.   A couple of students are going away but most will be in town, and with parents working and not a great deal of money for extra activities life isn't overly exciting for them when they are not in school.

I really don't know if our government really understands how much school means to many of our students.

I am very much looking forward to my break (and note I received my pay statement when I got home with about $1200 deducted from it for our strike and please note we aren't paid for the summer).  I know I keep making political statements!

Despite not doing report cards this year, I don't think I could work much harder than I do, the idea of ten days in Florida sounds wonderful, but as crazy as it sometimes can be, I will really miss my students.